Who the Fuck Is Roger Stone?

The dastardly dandy political hitman
is pro-pot and possibly treasonous

Roger Stone is Washington’s most stylish swamp creature, a political dandy with nefarious tendencies who’s slithered and mucked among notorious despots, soulless fixers and every American president from Richard Nixon to Donald Trump.

A simple Google search of the name “Roger Stone” reveals a dossier of dirty tricks, conspiracy theories and media madness, each link just one click away from dark realities and sinister insinuations.

Such canards would seem unbelievable if it didn’t seem Roger Stone himself hadn’t sprung from a failed Seth MacFarlane pilot — a fashion-forward, silver-haired sitcom villain broadly drawn as the spooky spawn of Mayberry’s Gomer Pyle and Harry Potter’s Draco Malfoy. It’s easy, yet disturbing, to imagine Roger Stone in a “Family Guy” cutaway, orgasmic at a keyboard, dripping the racist and sexist tweets that got him banned by CNN and MSNBC as a guest on news programs.

Here are six important things to know about the daffy and dastardly Roger Stone, including the skinny about the tattoo of Richard Nixon’s smiling face inked on Roger Stone’s back:

ROGER STONE LIKES POT
Never mind Roger Stone’s unlikely marijuana-themed homages to his mendacious mentor Richard M. Nixon, Stone likes pot for its power to generate tax revenue that will sustain America’s states and American jobs. “I urge President Trump to honor his word and keep his promise,” Stone blogged last week, reminding everyone that Trump had previously stated cannabis legalization should be up to the states. Stone saved his best mau-mauing for Attorney Jeff Sessions. Quoting Thomas Jefferson and the Old Testament, Stone said Sessions’ Southern-bred prohibitionist views are “far from the mainstream” and urged Trump to ignore his top cop. “Perhaps Attorney General Sessions has forgotten his Genesis from the Old Testament,” Stone blogged, quoting Genesis 1:29 which states: “I give you every seed-bearing plant on the face of the whole earth and every tree that has fruit with seed in it. They will be yours for food.” Stone then appeared on one of the media’s friendliest pot sanctuaries, “Real Time with Bill Maher,” reaffirming his message and presenting the host with a pot-decorated cake marking the show’s 420th episode. 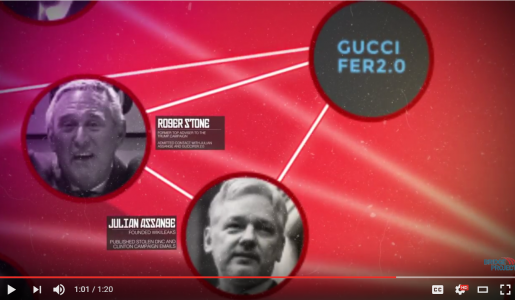 ROGER STONE LIKES RUSSIANS
Roger Stone is under investigation by the FBI and both houses of Congress for what would be his dirtiest trick — colluding with Russia to put his pal Donald Trump in the White House. Despite tweet evidence and Stone’s comments in a speech suggesting the contrary, Stone denies having advance knowledge of email hacks that helped tank Hillary Clinton’s presidential chances. Stone has bragged about his contact with Guccifer 2.0, the online operative the U.S. link to Russian intelligence but who Stone insists “may or not be a Russian asset.” Stone calls the matter “a scandal with no evidence.” Stone hired two lawyers to help him through the investigations.

ROGER STONE LIKES NIXON
Roger Stone himself and true-or-not website Snopes confirm there is indeed a tattoo of a smiling young Dick Nixon’s face inked between Roger Stone’s shoulder blades. Stone’s thing for Nixon began in the early 1970s when Stone creeped into politics doing deeds for Nixon’s Committee to Re-Elect the President, aka CREEP. Following Nixon’s resignation, the two maintained a close relationship. Stone and Nixon regularly dined together. Stone displays a photograph of Nixon over his bed. Stone’s political style hails directly from Nixon’s playbook, in Stone’s words, “pitting the common folk against the country’s elite and settling on and driving a central-issue message that polarizes voters along those fault-lines.” Despite his mentor being responsible for launching a racist drug war and intentionally disregarding the science about cannabis, Stone backed a strain of cannabis called Richard Nixon and maintains a stash of smoking paraphernalia bearing the likeness of the disgraced 37th president of the United States.

ROGER STONE LIKES BAD GUYS
When it came to learning from the previous generation of political fixers, Roger Stone could find no better malevolent mentor than Roy Cohn, a reptilian henchman who made his bones witch-hunting Communists alongside Red-baiting hater Sen. Joe McCarthy in the 1950s. After joining Ronald Reagan’s presidential campaign in 1979, Stone entered the big leagues, playing alongside the contemporary master of political skullduggery, Lee Atwater, a slick-as-shit GOP boogieman whose reputation was redeemed only by the cancer that later killed him. Stone’s past client list includes third-world criminals and despots like Ferdinand Marcos of the Philippines and Mobutu Sese Seko of the Democratic Republic of the Congo. ROGER STONE IS LIKE TRUMP
Like his longtime love-him/hate-him buddy Donald Trump (another mentee of Roy Cohn, who introduced the two) Roger Stone has a penchant for controversial bullshit. Already a rock star among alt-right rat-fuckers, Stone spoon-fed Trump’s “birther” conspiracy claim that President Obama wasn’t born in the U.S. and instigated Trump’s attempt to smear GOP rival Ted Cruz with marital infidelity and the ghost of JFK. Officially, Stone briefly worked as an as adviser to Trump’s presidential campaign. Unofficially, Stone created the persona that became president. Did Stone quit? Was Stone fired? Bromides divert from the bromance. Trump’s called Stone both a “good guy” and a “stone-cold loser.” These days, Stone’s mum on Trump. Stone is a longtime professional associate of Paul Manafort, Trump’s campaign chairman and a key character in Trump’s Russian saga. Previously, Stone worked as a lobbyist for businessman Trump’s gambling enterprise.

ROGER STONE LOVES THE GAME
Haven’t had enough of Roger Stone? Netflix has more Roger Stone starting May 12. Why watch a documentary about Roger Stone? As Trump explains in “Get Me Roger Stone”: “He loves the game, he has fun with it, and he’s very good at it.” Stone’s game, of course, is five decades of chicanery. You might want to get stoned before you watch “Get Me Roger Stone.” “I revel in your hatred,” Stone says in the trailer, “because if I weren’t effective you wouldn’t hate me.”

Slip These ‘Edibles’ Under Your Tongue for Fast-Acting, Great-Tasting Highs

Theme by Anders Noren — Up ↑